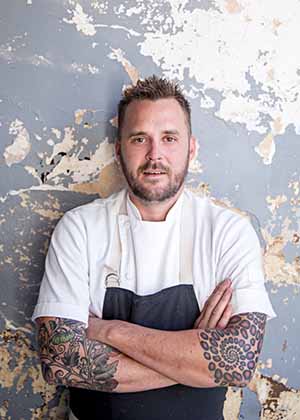 Men have long been known to don tattoos with the image or name of their favorite lady, with moms, wives and girlfriends often becoming a permanent feature on flesh. Executive chef Jeb Aldrich followed suit in this longstanding tradition – but with a surprising subject. The lucky lady in his life is Atlanta folklore legend Tiny Lou, Gypsy Room dancer and Hotel Clermont restaurant namesake, who now has a forever home on Aldrich’s left forearm, and his culinary curriculum vitae.

With this level of commitment comes a fiery passion and raw talent for cuisine, refined by Aldrich’s classical training from Johnson & Wales University and more than 17 years of industry experience. Hailing from Baltimore, Md., Aldrich launched his career at Peninsula Grill in Charleston, where he toiled during his time in culinary school. Proving that the apple doesn’t fall far from the tree, Aldrich moved to Alpharetta, Ga. following graduation to work for his father, award-winning chef and restaurateur Jay Swift, at the Rainwater restaurant. Eventually, he took his talents elsewhere, working with celebrated chef Carvel Grant Gould at Canoe and chef Joël Antunes at Joël, one of Atlanta’s most critically acclaimed restaurants. Wanderlust later drew him to Europe, where he cooked at properties in Austria and Italy before returning stateside in 2008 to join his father at 4th & Swift as chef de cuisine. Now, Aldrich helms the kitchen of the swinging French-American brasserie, Tiny Lou’s, presenting a playful approach to French favorites.

As his passion for the industry extends far beyond the kitchen, Aldrich maintains involvement with an array of national and local organizations, including the American Liver Foundation and Share Our Strength. Just as the famed guests from Hotel Clermont’s past have received critical acclaim, Aldrich was named as one of FSR Magazine’s “40 Under 40 Rising Stars” in 2014.