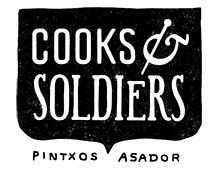 Matthew Ridgway brings more than 22 years of experience in the culinary industry to his role as executive chef at Cooks & Soldiers. From working in fine dining restaurants across the U.S. and France to running his own charcuterie business, Ridgway boasts an extensive background and unique perspective to the team.

After training at Johnson & Wales in Providence, R.I., Ridgway started his career at The Fountain Room in Philadelphia's Four Seasons Hotel, where was mentored by chef Jean-Marie Lacroix. Under Lacroix's guidance, he rose through the ranks to become chef de cuisine and chef de restaurant at Lacroix at The Rittenhouse Hotel, named Esquire's "Restaurant of the Year." In 2001, Lacroix sent Ridgway to France to hone his skills at George V, a three Michelin star restaurant in Paris and Le Relais Sainte-Victoire in Aix-en-Provence. Ridgway returned to the U.S. to work under James Beard Award winning chef Joël Antunes at Joël Restaurant in Atlanta and as chef de cuisine at New York's acclaimed Oak Room.

In 2009, Ridgway founded PorcSalt, a small charcuterie business focused on producing local, sustainable and artisanal products from pasture-raised duck. Ridgway went on to become owner and chef of The Pass, a neo-French "roadhouse" in Rosemont, N.J., which opened to critical acclaim from The New York Times and was quickly and consistently recognized as one of the state's finest restaurants.

Ridgway returned to Atlanta in 2015 and became executive chef of Gypsy Kitchen and Southern Gentleman, located at The Shops at Buckhead Atlanta. In August 2017, he returned to his upscale, fine dining roots at Cooks & Soldiers. In his spare time, Ridgway enjoys exploring new flavors, ingredients and techniques. He currently resides in southwest Atlanta.